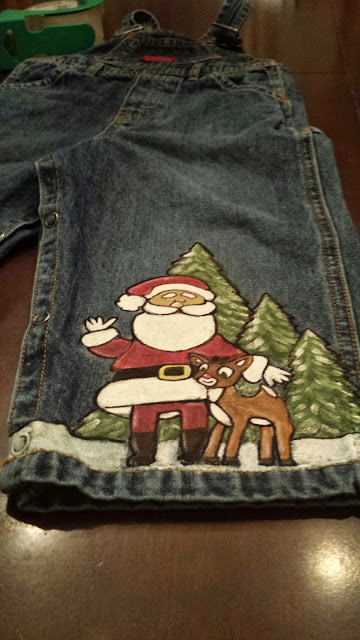 Posted by Victorian Lady at 12:53 AM No comments:

Getting in the Christmas Spirit! 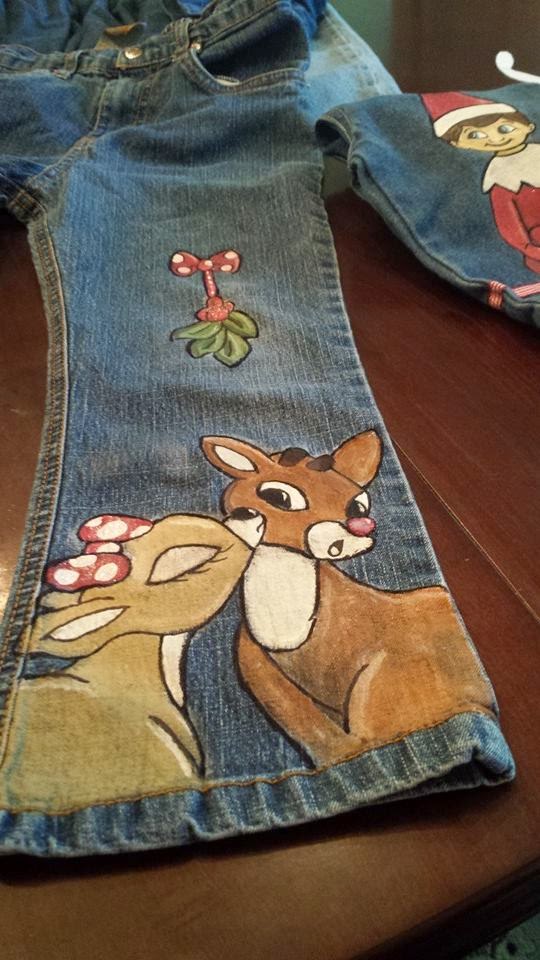 Posted by Victorian Lady at 12:57 AM No comments:

A Little Piece of Heaven!

Life grabs you and pulls you in crazy directions sometimes. I was busy raising babies, and lacking time and inspiration. Now, years later, I find myself in Washington state and it is BEAUTIFUL. Mount Rainier, for instance, is overwhelming- my eyes actually hurt taking it all in because I knew to really understand something that amazing would be just plain impossible. I mean, look at this! 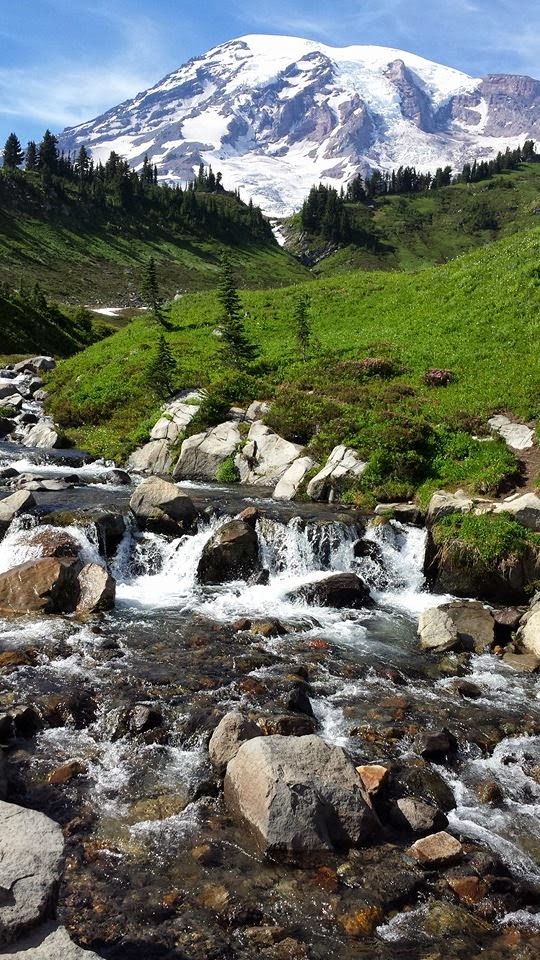 Inspiration is everywhere here! There are so many ideas that never made it out of my head because I've been so busy just enjoying being outside! What a treat!

I miss painting and sculpting though and want to learn more, improve, take some art classes too! So I pushed myself to enter into a Christmas bazaar on December 6th. Nothing big, just painting jeans, but I will be posting about it here. I like the way the paint pops on the dark background and has a chalky appearance. Hopefully this will help me get back in the swing of things!

Posted by Victorian Lady at 12:55 AM No comments:

Bring Out Your Rags!

My Dad sometimes tells me what life was like for him as a child- I love it when he does that. They were simpler times -milk men coming to the door, magnifying glasses on the television screen (if you were lucky enough to have one) and the rag man walking down the street yelling, "Bring out your rags!"

He was born from a generation that had everything, lost it, and made use of every last bit of what was left. Like that storybook where the man's coat went through several stages of life before becoming a tie. In my father's time, flour sacks became dresses. Dresses became purses. Purses became quilts. You used what you had.

I have always been so drawn to that- that one old thing can become a new one. That's why my supplies look like they came more from the recycling bin than from an art supply store. That's also why my husband gets in trouble for throwing it out by mistake! lol

One of my favorite projects from my father's time are rag rugs. My grandmother used to make them for her kitchen. Can't make one though! It always curves up like a bowl and doesn't want to lay flat. I will master it one day! In the meantime, I'm enjoying all the ragballs I've been making. They would wind these up until they had enough for a rug. The Edgar set has found a new home so now these are on my kitchen table: 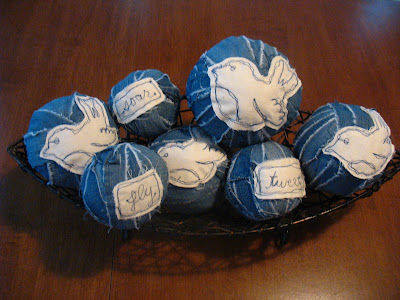 (Click on photo for listing and more photos)
I quilted the embellishments using free motion embroidery. So much fun!
I couldn't help but think that the message to fly, tweet, and soar is one that I want to instill in my girls. Just as long as those tweets are positive ones and not them squawking at each other like they have been lately! Good grief!

So, here's to simpler times and enjoying every bit of what we are given!

What's your favorite simple moment? I hope you make time for it today!
:D

Oh the cobwebs around here sure have built up! Sure has been quiet too. I've made up for all that silence at my house. Baby cries, giggles, and yes, even some words! Allie Beth turned one just a couple weeks ago and she is such a joy. See? 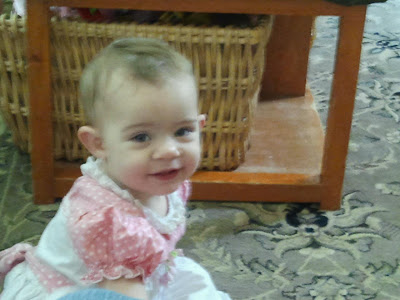 Growing ever so slowly more independent from her mother, I have been able to squeeze a couple hours here or there and make something. My nights are once again becoming my own and I'm trying to balance them so that I can create, but also have enough energy during the day.

I was in an local art show at the Sundust Gallery in July- first time ever for something like that. It was one of those "time to push myself" moments so that I could have the experience. It was great seeing my paintings on a gallery wall. My girls told me that my art was in a museum. lol One painting sold and I am still waiting to get paid. haha I saw it sitting in the office waiting to be packed up and I wanted so badly to know who bought it, where it was going to go, etc. That's one of the advantages to selling online. Sometimes I even get pictures of them on display- more fun that way!

I have a few things that are practically finished and a couple that actually are! lol In an effort to address my fabric stash (exact size unknown as it is hidden all over the house!), I made this themed rag ball set just in time for Halloween. 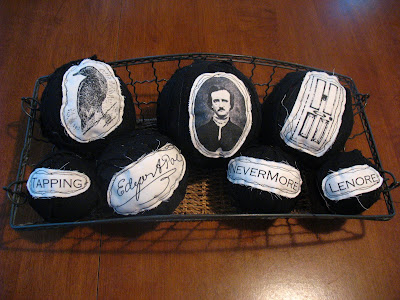 You can click on the picture to go to the listing. More pictures too.

Thanks for sticking around and waiting for my little Allie to not need me so much. She's my last baby, and along with juggling my 2 redhead beauties, the break from art was just what we all needed. <3

Posted by Victorian Lady at 3:32 PM No comments:

What I Did Over My Summer Vacation... 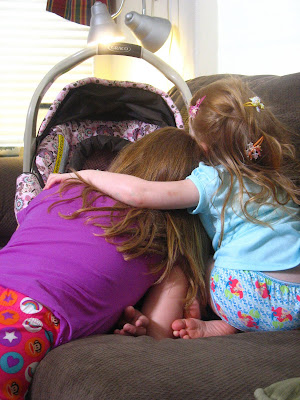 May I introduce to you my favorite art project of the year? 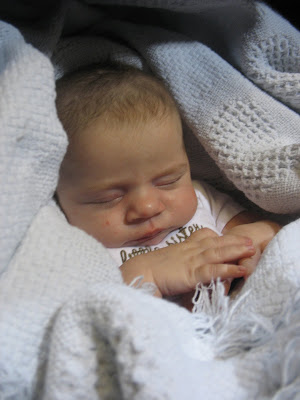 I worked very hard on this little art doll! 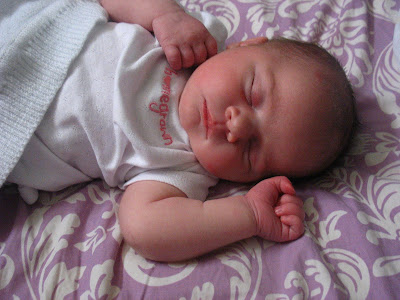 Hours and hours of late nights and no sleep. 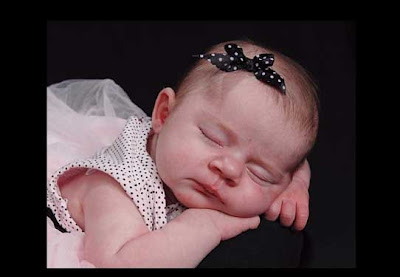 I carried her everywhere to keep her safe. 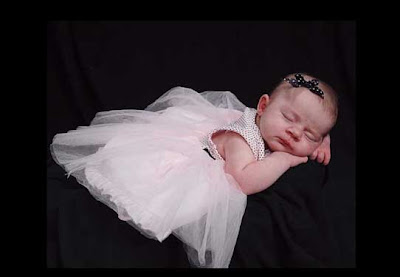 We seeked the advice of several experts to make sure she turned out just right. 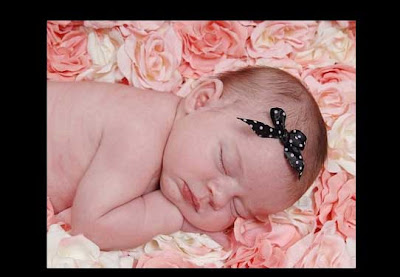 And she did. You won't see her listed anywhere, we're keeping this one. 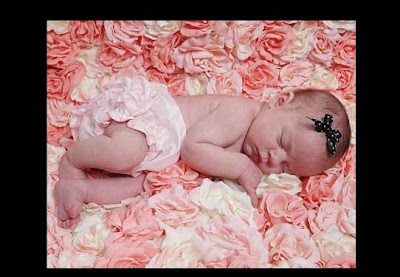 We are settled in- she is a very good baby- so much so that my little kitchen studio is busy again! Expect to see some Jack-o-lanterns glowing on these pages soon!
Hope you are enjoying these nice fall days! :)

Rock a Bye Baby on the Tree Top... 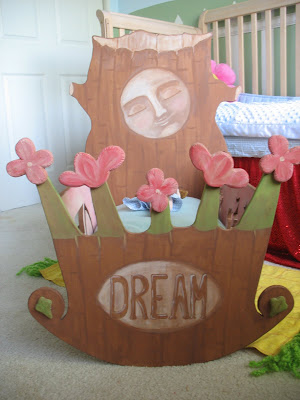 This is the cradle that Dave made for Madeline Mae. She has a Wizard of Oz room and for Christmas she asked for a cradle to rock her baby dolls in. 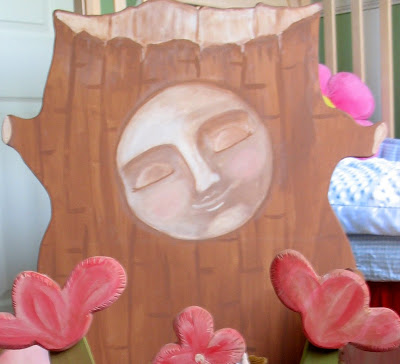 My hubby can do amazing things with wood! I'm very lucky that I can draw him something and he can make it. This design, however, was all his! We have this arrangement where he builds and I finish it. Something to do with almost passing out in the garage while tediously finishing our 400 piece armoire when I was pregnant with Lil. lol


I've been trying to convince him to sell on Etsy. I think I'm making progress! Most of the pieces he makes are very large- furniture, storage units, princess headboards. Lillian sleeps in the cap of a toadstool every night in her fairy bedroom...I'll have to show you pictures of that sometime! He's been brainstorming on some items that are smaller and more reasonable to ship.


So anyway, the idea here is that one of the nice apple trees in the Land of Oz is rocking the baby dolls away to some sweet dreams of their own. A castle and unicorn at Madeline's request... 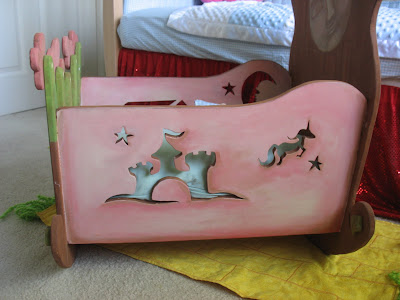 And Auntie Em's farm on the other side, because we all know there is no place like home. 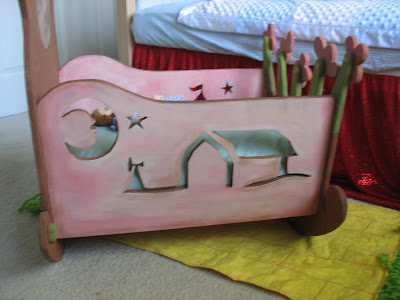 That's all for now, except for that tonight, I wish you all a very sweet... 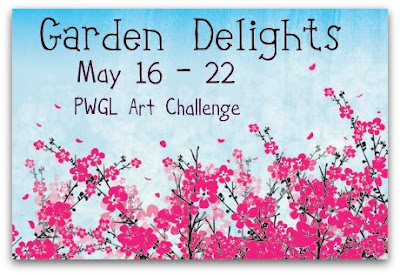 Hello! I've posted two paintings for this challenge! It was really fun and in a totally unintentional way. When I wrote down the theme, I accidentally left out the "de" in delights. I kind of liked that...without light, sunlight anyway. :)

So I have some bugs getting their groove on at a twilight garden party and a garden statue angel hit by moonlight. Moonlight is one of my favorite things. I used to love going to sleep at night as a kid just watching the moon shine it's light through my window. :)

I managed to put three other ones up too...trying to catch up. :) You can find them here. Do a search for PWGL and you will find more.

Goodnight all! Hope you are lucky enough to get a glimpse of that moonlight!

How Great Thou Art!

Life is Just a Bowl of Cherries

Happiness is Where He Is

There is Always Time for Tea - Alice in Wonderland

Bloom Where You're Planted

Be True to Yourself